Learn More About the Annual General Meeting (“AGM”) in India Today and Know Your Obligations as a Shareholder! 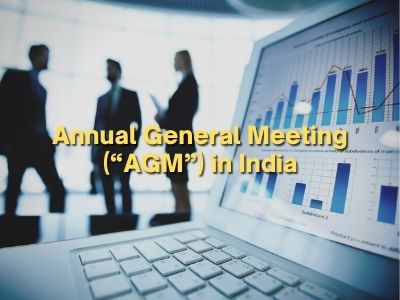 As a shareholder, there is a general meeting will you have to attend every year. But why is it held yearly, and what is it about? The Annual General Meeting, otherwise known as the AGM, is a yearly meeting between the shareholders and the directors of the company, private limited or limited. This meeting is dedicated to discussing the annual results of the company and to inform shareholders of any significant developments. This meeting also follows the Companies Act, 2013, which dictates that such arrangements are mandatory. Learn more about the Annual General Meeting (“AGM”) in India today and know your obligations as a shareholder!

Who Are the Parties Involved?

The following is a list of those involved in such a meeting; they will be given notice at least 21 days before the conference itself. Among the parties involved are:

How Does the Process Work?

This meeting is planned in nature, and it can take significant time to prepare, depending on the company before the actual meeting is held. This is because of the sheer amount of evaluation and calculations necessary to provide a basis for the plan prior to the meeting itself. We broke down the process in three major parts:

Financial statements, reports compilation, payment of dividends, drafts of notice, share transfer procedures, media relations (if the company is prominent enough) and other relevant documents are thoroughly considered and prepared before the meeting. Certain documents such as the drafts of notices, reports and others require the signature and approval from the chairman. Upon completion, a notice of the AGM will be sent out to the relevant shareholders and auditors; the notice will contain information such as time, date, location, matters to be discussed (agenda), procedures of e-voting (if any), proxy forms, explanatory statements and route map.

All seats are designated to specific people, especially the chairman, company secretary and directors. Arrangements were made to ensure that all parties are ready and refreshed before the quorum. Once the meeting begins, the chairman will be provided information as well as reports which he or she will present the relevant information to the shareholders. This is a lengthy process, and many matters of the development, profits, auditing, change of power, the appointment of new auditors and dividends declaration of the company will be discussed. In this meeting, shareholders will also be provided with opportunities to make their inquiries. Should the chairman not be able to make an appearance due to unforeseen circumstances, the directors will have to appoint among themselves a chairman for the meeting’s purpose.

A minute will be prepared and will be signed by the chairman within 30 days. The memorandum and articles of association (AOA) will be produced. Intimation of appointment of directors (Form DIR-12) with its fees, vital accounting information (AOC-4), MGT-15 and special resolutions (MGT-14) will be sent to the Registrar of Companies 30 days after the meeting. During this time, depending on the type of company, the procedures may vary, for more information, please refer to your nearest authoritative bodies.

An AGM is held earliest of the following dates:

One final key thing to remember is the failure to hold an Annual General Meeting (“AGM”) in India is a punishable offence up to Rs 1 lakh in fines. AGM can also be held via video conferencing.