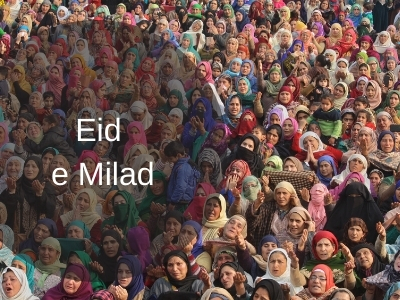 In a constitutionally secular country like India, where people of almost every faith and religion reside in harmony, everyone celebrates festivals with extreme joy. Islam is the second major religion in India and has many festivals of its own, like Eid ul Fitr Bakrid or Eid al Adha, Muharram, Eid ul Juha, etc. Among them is Eid e Milad or Barawafaat.

In this article, we discuss the significance of Eid e Milad in Islam and how we celebrate it in India.

Eid e Milad is a day that holds a lot of significance in Islam as it indicates the birth of Prophet Mohammad. However, given that he also passed away on the same date, creates a feeling of mourning. Eid e Milad falls on the 12th day of the third month of the Islamic calendar.

On the 12th day of Rabi-ul Awwal, Muhammad was born in 570 CE in Saudi Arabia. Muslims believe him to be the man who was guided by Allah to show the righteous path of religion to people. He is the central prophet of Islam. In his early life, he led a life of a shepherd, and later, he laid the foundation of Islam and formed a kingdom devoted to god, which we now know as Saudi Arabia. After his demise in 632 CE, his followers started to preach and celebrate various holidays to commemorate his life and teachings.

Even if Muslims were celebrating many festivals as tradition, the birth of Prophet Muhammad was not widely celebrated until Fatima, in Egypt, established a day to celebrate the birthday of Muhammad. This day was referred to as Milad un Nabi. On the first Milad un Nabi Muslims gathered in Mosques to pay respect to the prophet. Muslims honoured Muhammad in many ways, and sermons and discussions about religion were some of them.

How is Eid e Milad Celebrated in India?

Muslims celebrate Eid e Milad in different manners as per their beliefs and traditions. Some people see this day as a day of happiness and some mourn for the death of the prophet. Following are some ways in Islams celebrate the Eid e Milad in India:

Clergymen see it as a tradition to distribute sweets among people. Honey is one of the most popular sweets in the day. Many muslin scholars believe that Prophet Muhammad was fond of honey.

On the day of Eid a Milad, Muslims visit Mosque and listen to sermons and recite prayers. After the service at Mosque, Muslims sit together with family and friends to discuss the history of Islam and the life of the prophet.

Along with several public events on the day of Eid e Milad, Muslim families have some traditions to follow within the residence. Members of the family talk about the teachings of the prophet and his deeds throughout his life. They discuss the ways in which they can improve their life and steps to follow to be a better human.

One of the common practices of Muslims in India on the day of Eid e Milad is singing in public places. Maulud is one of the most popular songs for this holy occasion. As the song symbolizes one’s loyalty to Allah, people believe that the tune attracts good luck.

Barah Wafat falls on the same day as Eid e Milad. The festival is to specifically mourn the solemn day on which the prophet passed away. It is to commemorate the 12 days of sickness and his ultimate demise. This festival event observes the procession of a glass casket carrying a symbol of Prophet Muhammad. This casket is Paraded in public for everyone to pay their respects.

On this day, Islamic scholars participate in public lectures and discussions about the deeds of Muhammad. They also discuss the teachings of Islam. These discussions often lead to debates on disputed matters relevant to Islam.

Muslim poets portray the life of Muhammad in their poems. Furthermore, artists across the countries draw paintings relevant to parts of his life. One of the most common scenario among poets and artists is the first encounter of Muhammad with Gabriel.

What to Do During Eid e Milad in India?

On the holy day of Eid e Milad, spend time to learn about Muslim culture and witness the procession of glass casket. Muslims do charity and give treats on this day. People visit each other on a public holiday in India to celebrate the occasion grandly.