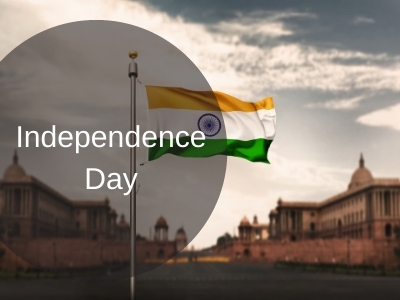 Independence Day holds tremendous ground in the list of Indian public holidays, and people throughout the country celebrate it a great excitement. India got free from British control and became an independent country on August 15th, 1947. This national holiday reminds every Indian citizen about the emergence of the new start. It was the start of an era of relief from the rules of British colonization of more than 200 years.

Every year on August 15th, people celebrate Independence day by decorating the streets with the tricolours of the national flag. Landmarks and other government buildings are lit up in the national colours of the country. It is a national holiday on which TV channels telecast patriotic films, documentaries, and other programs related to India’s freedom.

India fought many tough battles against the rule of British Colonialism. Many protests were detained, such as Gandhi-led non-violence resistance and civil disobedience movement against the exploitation.

India officially got its independence after 200 years of British law on August 15th, 1947. On this day, the foremost Prime Minister of India, Jawaharlal Nehru, raised the flag about the Lahori Gate of Red Fort, Delhi. He addressed the country and marked the start of a new tradition followed even today. Every year, the Prime Minister addresses the nation before the celebration. He hoists the flag on the ramparts of Red Fort. After that, the nation makes tributes to those who sacrificed their lives to fight for India’s freedom from the British.

How is Independence Day in India Celebrated?

Independence Day in India celebrations consist of various patriotic programs in multiple ways. Although celebrations for Independence Day take place throughout the nation, Delhi, the capital city of India, serves as the home to Red Fort is the main staging area for celebrations. On this national day, the President of India delivers a speech from his office that is broadcast countrywide.

What to Do During Independence Day in India?

Independence Day is observed as a public holiday across the nation, with banks, offices, and post offices, and schools remaining closed. We observe with flag-hoisting ceremonies, cultural events, and parades in all Union Territories and states. Furthermore, Schools and colleges organize debates and quiz competitions. Students can participate in cultural events organized on Independence Day. Preparation for this day starts in advance before a month.

Children and adults carry the Indian flag, fly kites, participate in cultural festivities, and many more. The entire nation celebrates Independence Day with great enthusiasm and with a tremendous spirit of patriotism.

In the central or northern cities of India, people consider flying kites as the major festivity of this day. In the year 1927, Indian revolutionaries and other freedom fighters flew kites as a mark of protest against British rule with the slogan ‘Go Back, Simon’. Since that day, flying kites has become a tradition in India. On Independence Day, we can see kites of different colours and sizes flying in the sky, either for fun or as a part of the competition.

A special Beating Retreat Ceremony is organized in Amritsar at the Wagah Border on Independence Day. It features cultural dances, sword fighting, a parade, ceremonial closing of gates, and sinking of the flags ceremony.