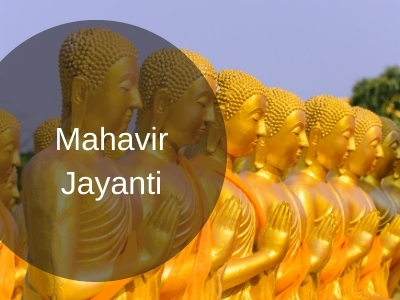 Mahavir Jayanti is observed on the 17th day of the month of the rising moon known as Chaitra in India. According to the Lunar Calendar, it is often celebrated in March or April. Look at next year’s dates for Mahavir Jayanti Public Holiday.

Mahavir Jayanti is a day off for schools, the general population, and even some businesses are closed on this day. This public holiday has great cultural importance and serves as a day of happiness and humility.

Mahavir Jayanti is one of the most auspicious festivals of Jains. The day marks the birth anniversary of Lord Mahavira and is embraced by prayers, religious processions, and teachings. On that day, Jain temples all over the country are decorated with flags and alms. Gifts in the form of donations are offered to the needy. Jainism focuses on harmony and peace across the world. The religion stands for bringing no harm to living mortals. It is a public holiday that is especially popular in the eastern state of Bihar, where Lord Mahavira was born.

Every year, the Jains celebrate Mahavir Jayanti to honour Lord Mahavira’s preaching and the teachings and philosophy of Jainism. According to numerous historians Lord Mahavira was born in a place popularly known as Ahalya bhumi. At an early age, he took over his father’s kingdom and ruled it for more than 30 years. Later, he sacrificed all worldly controls and decided to seek enlightenment in life. Many people converted to Jainism with the expectation that they would be able to experience a state of happiness and prosperity. All his life Lord Mahavira preached five principles; namely Ahimsa, Satya, Asteya, Brahmacharya, and Aparigraha to his followers.

Ahimsa principle tells that Jainism followers should refrain from violence in any situation. People who follow the Satya principle will always tell the truth. Asteya principle states to not steal from others. Brahmacharya principle requires Jain followers to exhibit traits of chastity. People who follow Aparigraha become mindful and diminish their needs for belongings. According to Jain writings, Lord Mahavira got moksha at 72 age. Many people all over India celebrate Mahavir Jayanti to imitate the actions of Mahavira and to follow his teachings.

How is Mahavir Jayanti in India Celebrated?

The followers of Jainism participate in several activities during this holiday that let them bond with their family. Look how people in India celebrate this famous festival of Mahavir Jayanti:

What to Do During Mahavir Jayanti in India?

People of the Jain community celebrate Mahavir Jayanti in the memory of the last spiritual and divine teacher of Jainism. They believe in simplicity and perform various humanitarian activities on this day. There are incredible processions held across various cities with images of Mahavir.

People usually do puja, bhakti on this auspicious day. However, one of the best ways to celebrate Mahavir Jayanti is to recall the traditions and wisdom of Lord Mahavira and implement them in life.