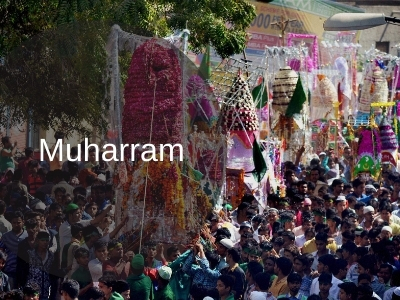 Muharram marks the start of the Islamic New Year and is a public holiday in India. It is a day off for the general population, workers, and schools. Furthermore, most of the businesses are closed on this day. Muharram is mainly an Islamic holiday, but people following other religions also take part in celebrations.

The lunar Hirji Calendar is the first month of the Islamic New Year, and all Muslim groups observe this occasion differently. Some fast during the 9th and 10th or 10th and 11th days of the month during daylight hours. Some people regard Muharram as the month of grief, remembering the Battle of Karbala.

The tenth day of Muharram is a public holiday in India, and all government offices, banks, post offices are closed in India. Organisations, Islamic stores, and other businesses may be closed or have less opening hours on the day.

Muharram starts after the new moon’s sighting on the last day of the Islamic Calendar and is considered a holy month. The day memorializes the death of Hussein Ibn Ali, grandson of Prophet Mohammad. Hussein was murdered during the Battle of Karbala after questioning the legality of the Caliph Yazid. Karbala is a city in central Iraq, and it’s believed that the battle was held in the year 680 AD on the Day of Ashura. Due to the murder of Prophet Mohammad’s grandson and the cruelty of the battle, many Shia Muslims mourn and recall the bravery of the Prophet’s family.

Though there are several marked days during Muharram, Muslims observe Day of Ashura as the most important day. It means Ashura, the 10th day of Muharram, the family’s braveryital day for Muslims in India and elsewhere. It reflected the day when Pharaoh of Egypt saved Prophet Musa by God, and Noah left the Ark. Apart from it, many people believe that it was on this day when Adam and Eve were created, and on which Moses directed Israel through the Red Sea.

How is Muharram in India Celebrated?

Sunni and Shia Muslims have different purposes of celebrating Muharram. Most of India’s Muslim population is Sunni, and nearly a quarter of Indian Muslims are Shias. Some members of both Sunni and Shia groups consider themselves Muslim mystics or Sufis. For most Sunni Muslims, this month is the start of the Islamic New Year and signifies peace and reflection. The month of celebrating Muharram represents a solemn, an insightful day in Islamic history for Muslims following Shia.

What to Do During Muharram in India?

Many Muslims give extra prayers, fast, spend long hours together in the mosque. Shia Muslims dress in black, attend solemn assemblies referred to as majlis, avoid music, listen to speeches on the Battle of Karbala. Furthermore, in the day, they refuse to attend any happy events like weddings or parties. They beat themselves with sharp weapons, and this tradition is popularly known as Qama Zani or Takbir.

It is a sign of integrity for many pilgrims to visit the tomb of Husayn Ibn Ali in Karbala. To honour the momentous day, Muslims narrate verses from the Holy Quran. Whether Muslims celebrate Muharram as starting the Islamic New Year or grieve the loss of life, the day is crucial for everyone.