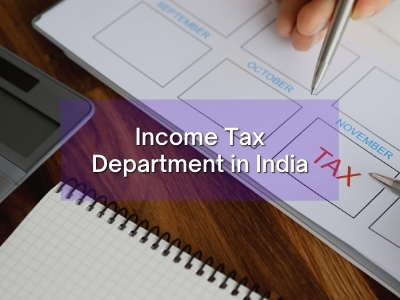 The Income Tax Department (ITD) is a government agency undertaking direct tax collection of the Government of India which ITD is governed under the Department of Revenue of the Ministry of Finance.

The main duty of the ITD is to enforce diverse direct tax laws, the key statutory legislation among these being the Income-tax Act 1961, to collect revenue for Government of India. It also administers other economic laws such as the Benami Transactions (Prohibition) Act, 1988 and the Black Money Act, 2015.

Benami Transactions (Prohibition) Act, 1988 bans a few types of financial transactions. The word Benami is defined as the transaction is done in the name of a third party and not the principal owner. Under this Act, all Benami transactions are prohibited and it also empowers the Government with the right to recover property held by a third party without any compensation. While the Black Money (Undisclosed Foreign Income and Assets) and Imposition of Tax Act 2015 have the purpose of curbing black money or undisclosed foreign assets or income, by imposing taxes and penalties on such income.

The Income Tax Act 1961 covers a wide scope and empowers ITD to levy a tax on the income of individuals, firms, companies, local authorities, societies, or other artificial juridical persons. Therefore, the ITD has jurisdiction over all the businesses, professionals, NGOs, income-earning citizens and local authorities among others. The Act authorizes ITD to tax international businesses and professionals. Therefore, ITD deals with all matters of Double Taxation Avoidance Agreements and other aspects of international taxation such as Transfer pricing.

Combating tax evasion and tax avoidance practices is a key responsibility of ITD to ensure a constitutionally guided political economy. One measure to combat aggressive tax avoidance is the General Anti Avoidance Rules (GAAR) where it is governed by the Department of Revenue under the Ministry of Finance.

Administration and management in the Income Tax Department (ITD) are governed by a statutory body, called CBDT, at peak level and 18 territories based regional headquarters at field offices level. Besides these are 10 professional directorates within the ITD, most comprehensive and popular among this being the Directorate of Investigation.

Being a part of the Department of Revenue in the Ministry of Finance, the CBDT also supplies some inputs for policy and planning of direct taxes in India and majorly in charge for administration of direct tax laws through the ITD. The CBDT and CBIC are the statutory authority that constituted under the Central Board of Revenue Act, 1963. At present, the CBDT and the CBIC have six Members each. The Members also consists of ex-officio Special Secretaries to the Government of India.

The Chairman and members of the CBDT was been chosen from Indian Revenue Service (IRS). These members are part of the top management of the ITD. They have the responsibility of collective decision making of discharge of statutory functions of the CBDT and of the Union Government under the various direct tax laws. This also includes designing policies that are setting up and the structure of the Income Tax Department.

There are methods and procedures of work of the CBDT which needs to be adhered to when dealing with measures of disposal of assessments, collection of taxes, prevention and detection of tax evasion and tax avoidance. Besides that, management of recruitment, training and all other matters relating to service conditions and career prospects of all personnel of the Income-tax Department is also one of the many duties of the members as well as laying down of targets and fixing of priorities for disposal of assessments and collection of taxes and other related matters.

Lastly, write off of tax demand exceeding Rs.25 lakhs in each case and policy in respect of grant of rewards and appreciation certificates are part of the duties of the members.

As mentioned in the above paragraph, apart from controlling the process of inflow of taxes and their collection by the Indian Government, the ITD is also responsible for enforcing the Double Taxation Avoidance Agreements. Many countries have entered into tax treaties (also called double tax agreements, or DTAs) with other countries to reduce and prevent double taxation.

Double taxation is defined as the levying of tax by two or more jurisdictions on the same income. Examples of such situations would be, the case of income taxes or from the asset in the case of capital taxes, or either from the financial transaction in the case of sales taxes. Thus, ITD liable to inhibit this double taxation by overcoming a range of taxes including income taxes, inheritance taxes, value-added taxes, or other taxes through this treaties. ITD is also responsible to deal with various aspects of international taxation such as Transfer pricing.

Transfer pricing refers to the regulations and permits for the establishment of prices for the benefits and services exchanged between a subsidiary, an affiliate, or generally controlled companies that are part of the same enormous enterprise. The Income Tax Department seeks grant from the Finance Act 2012 where having the power to combat aggressive Tax avoidance by enforcing General Anti Avoidance Rules.

The Chairman and every member of CBDT are liable for utilizing supervisory control over conclusive areas of field offices of ITD, known as Zones. The various roles and responsibilities of the CBDT are distributed amongst Chairman and six members. Only fundamental issues are reserved for a collective decision by the CBDT.

He/she is eligible for tax payment if an individual, whether a resident or an NRI, whose place of origin is India and who gets an income in the country falls in the slab of IT. IT Department is a government agency that is responsible for controlling the income tax collection in India.

Thus, here’s a glimpse of 5 sub-categories of incomes that fall under Income tax departments jurisdiction. First, any individual that has a salaried income, pension and salary fall into this category. Second, earning from other sources, remunerations from fixed deposits, interest on your savings account, etc. Third, any individual that has a real estate or a property, it falls into the category of rental income. Forth, gain from capital investments, your earnings from selling these assets in the form of market shares, house property and mutual funds shall fall into this category. Lastly, you are an entrepreneur or a businessman, you fall into the category of “self-employed individuals”. Lawyers, doctors, CAs, and teachers are held within this category.

Income tax is a tax forced by the central government on the taxable income of all persons including those who are individuals, Hindu Undivided Families (HUFs), companies, firms, an association of persons, a body of individuals, local authority and any other artificial judicial person.

In general, direct taxes are classified as Income Tax and Corporate Tax. Income tax refers to taxes onto an individual or a Hindu Undivided Family or any taxpayer other than companies need to pay on the income received. The rate at which such income should be taxed based on what had prescribed in the law. While corporate tax refers to the tax that companies pay on the profits they make from their businesses. Here again, a particular rate of tax for corporates has been prescribed by the income tax laws of India.

There are many forms of taxes takes in indirect taxes. That is the service tax on restaurant bills and movie tickets, value-added tax or VAT. A unified tax is the Goods and services tax which has replaced all the indirect taxes that business owners have to deal with.