Board of Directors Meeting Requirements in India

Like Every Other Country, the Board of Directors Meeting Requirements in India Has Its Own Set of Rules and Terms. Learn Them Today! 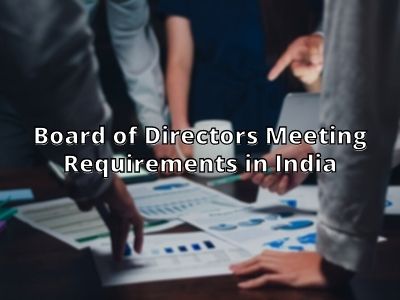 What Constitutes as a Board of Directors?

A company or an organization can be summed up as an artificial person or as corporate personhood. Since the company is termed as an artificial person, it acts through office bearers who manage the affairs of the company; also known as the members of the Board of Directors. These directors are members responsible for managing affairs of the company; it necessitates that they meet at regular intervals every now and then to discuss significant decisions.

The members of the board are a group of individuals that were elected to represent shareholders. The board is a governing body of the company that has designated meetings at a regular time frame to set policies for corporate management. These meetings must follow the standard operation procedure (SOPs) which will be further elaborated in this article, focusing on the meeting requirements of the Board of Directors in India which has over a million companies scattered around the country.

The Basics of a Board of Directors Meeting Requires in India

The requirements of the Board of Directors of meeting in India starts since the very first annual general meeting (AGM), that takes place within 30 days after the company has been incorporated. The conditions for an AGM in India should be held on the earliest of the following dates:

Coming back to the Board of Directors meeting, it has a set of preconditions to be fulfilled. Amongst them are, there should be a minimum of at least four sessions of its Board of Directors every year in such a manner that not more than one hundred and twenty days shall intercede between two consecutive meetings of the board. In addition, the participation of directors in a meeting of the board may be either in person or through video conferencing or using the means of other audiovisual methods, as long as it is capable of recording and recognizing the participation of the directors.

Other conditions of the meeting of Board of Directors in India are the notice for the discussion should not be less than seven days written to every director at his address registered with the company and this notice will be sent in the form of a letter via post or digitally by email. A shorter notice would be given only when there is an urgent situation that should be tackled and every officer of the company whose duty is to provide notice under this section and failed to do so shall be liable to a penalty of twenty-five thousand rupees.

The requirement for the meeting for the Board of Directors in India is specified to small-scaled companies. For example, a one-person company or small company and dormant company can be assumed to comply with the same SOP as the more prominent companies of this section. However, this only applies if at least one meeting of the Board of Directors has been conducted in each half of a calendar year provided not less than a gap of ninety days between the two meetings.

Board of Directors meeting requirements in India are crucial to the makings of an India company, as they address the important ongoing matters and brainstorm solutions for the betterment of the organization.