Doing Business in India VS China

India VS China: Comparison of the Two Countries for Setting Up a Business 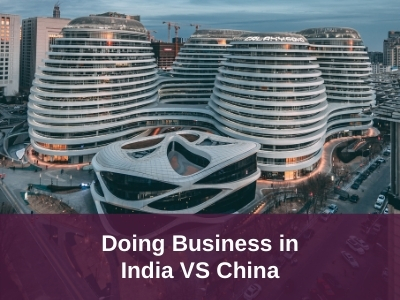 Below are some points that will help you answer some doubts on India VS China: Which country is better at setting up a business?

The framework of Institutions, Politics, and Legislation

In doing business, it is typical to compare the set of institutional reforms and a country’s political structures. This is where India and China have a major difference. India has a democratic system referred to as “the strongest democracy in the world,” while China is a mono-party system (Communist Party).

Theoretically, this provides many competitive advantages for India. India’s legislation system provides better ownership rights. China, on the other hand, is rumoured to be a sanctuary for property theft. Moreover, business in China is through partnerships and personal ties.

Next in line are corporate income tax rates. In India, the country is pursuing legislation to amend its tax base for the first time after 50 years. They seek to implement goods and services tax (GST) at different rates between internal purchasing and selling. The GST will be approximately 16% of the sales amount.

Contrarily, China charges a universal system of VAT refunds on exports and does not allow refunds at all in sectors like clothing.

The reality that China started introducing its policy reforms and opened up before India meant that it had gained a good start for many years in economic modernization. This means that, with relation to economic growth, technology, infrastructure, overall production capacity, and standard of living, China is far more advanced.

Though India may have constraints, its financial markets are much more effective than those of China. In reality, Indian entrepreneurs have greater prospects than their Chinese counterparts to get funding from financial institutions. It is also good to note that democracy isn’t a barrier to business growth in today’s modern society. Instead, business people should look at democracy in terms of freedom of information, which provides an economic advantage.

China and India as FDI Destinations

China and India are two of the preferable countries for global businesses. Yet, due to cultural differences, language, business practices, or legal protection, many business owners are hesitant to invest in China.

On the other hand, 300 years of India’s British presence have greatly contributed to the country’s culture of businesses, administrative organizations, and legislative systems. These advantages are among those that Western businesses could be more familiar with.

Modes of Entry in China and India

In China, the legal structure for foreign investment regulation is varying and is prone to change. Since the country joined the World Trade Organization (WTO) in December 2001, the law has continuously evolved.

Whereas in India, there are only two major laws on foreign investment. The Foreign Exchange Management Act of 1999, regulating the entry of foreign investment, and the Companies Act of 1956 (passed in 2006), regulating the activities of the businesses formed. Every entry as a foreign country is subject to approval in the RBI(Reserve Bank of India). When the business involves an industrial license, the SIA(Secretariat for Industrial Assistance) and FIPB(Foreign Investment Promotion Board) shall be notified or authorized according to the chosen method of entry.

As for business opportunities, recruiting foreign architects and engineers became popular because of China’s urbanization process. Conversely, in India, because of social and habitual changes, construction is also developing. The high demand for housing is related to the growing purchasing capability of middle-class Indians. Also, biotechnology, wellness tourism, mining, and food production are sectors where investment is encouraged.

What Do We Learn From This?

Entrepreneurs should be careful in deciding which country they should set up their business. The facts mentioned above are generalizing results about how countries are compared to each other.

While it’s obvious that India is the better option than China, business owners should also seek Business Solutions Services in India. 3E Accounting is the leading business solution provider in India. The company has helped businesses, startups, and established enterprises achieve heights and scale higher in business. Contact us, and let’s set your business on the right track.