Doing Business in India VS Vietnam

Doing Business in India VS Vietnam: Which One Is the Best for You? 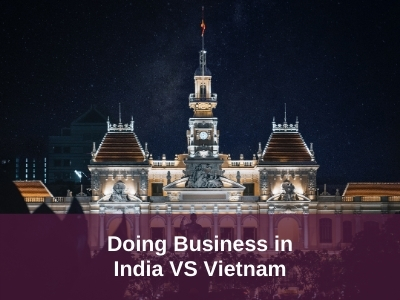 India vs Vietnam- which country would you choose if you want to make an investment?

Since we’re talking about money the moment we invest, it’s just wise to gather information first before coming up with a decision. We can use our assumption at the initial stage but we still have to know the facts when finalizing our business decisions. The money on investment could go right or wrong, depending on where and when we invest it.

Let’s examine the two countries fighting for business investors, India VS Vietnam, and let’s find out which one is the best.

India Has the Following Economic Profile

India is considered as one of those old countries in the world. It’s the birthplace of the 4 major religions namely Hinduism, Buddhism, Jainism, and Sikhism. Because of this, India has a rich culture and philosophies.

There are certain countries near India and they share a border with them. These include Pakistan, China, Nepal, Bhutan, Bangladesh, and Myanmar. Being the second-most populous country in the World, registering at 1.3 Billion, it could surpass China and become number one within the next 10 years.

One of the good things that India Offers to businesspersons is its competitive interest rate for business loans that would range from 11-20% and a processing fee ranging from 1-3% of the loan amount. Business loans are important to startups especially when they are just about building up the office, furniture and fixtures, and other assets of the company. Fortunately in India, these services are available and accessible.

The big population in India provides them with certain advantages like focusing on providing services. Certain businesses like IT, Business Outsourcing Services, and Software Development are just some of the fields where India serves best.

Aside from those things mentioned above, India is known also for agriculture and fishing. It will be advantageous for businesspersons if they capitalise on these.

Incentives and Attractions of India to Foreign Investors

There are several reasons why you should invest in India. The following are some of them:

Vietnam Has the Following Economic Profile

Vietnam is a country in Southeast Asia. Its neighbouring countries include China, Laos, and Cambodia. The country is densely-populated and is currently gaining popularity as a tourist destination in the region. In 2007, Vietnam joined the World Trade Organization modifying its centrally-planned economy to a more open economy.

The economic strategy that the government of Vietnam employed was primarily a mixed economy. The government has high control on the basic commodities, prices, and movement of goods but it also allows the participation of limited private companies. Although the country has already joined some economic unions like Asia-Pacific Economic Cooperation (APEC), the Association of Southeast Asian Nations (ASEAN), and the Trans-Pacific Partnership (TPP), the economy is still not liberal.

No matter how the Vietnamese government controls its economy, it will still need products and services that the country can’t provide for itself. The country needs investments, particularly in construction and building.

As the economy of Vietnam progresses, good roads must be provided for the movement of products and services. Aside from this, infractructions like business buildings, internet, and telecommunications must be provided and upgraded as well.

Last but not least, Vietnam is also calling for investors who can provide different products and services such as beauty and cosmetics, real estate, agriculture, and car business.

Incentives and Attractions of Vietnam to Foreign Investors

There are several reasons why you should invest in Vietnam. The following are some of them:

The Call to Make a Decision Is Up to You

Who is the winner between India VS Vietnam? Well, it depends on the current situation of the investor. The market in India is big. It’s considered a Super Economy. It also offers the best option for your business like cheap labour, good support from the government, good infrastructure, and a competitive business loan interest for those who need it. However, Vietnam is not yet saturated and you are not limited as to what type of business to open.

In the economic battle between India VS Vietnam, are you having difficulty to choose who is the winner for you? We at 3E Accounting would like to help. We’re among those known Company setup specialists on the planet and we will assist you in aspects where you’re having difficult decisions.

Go to Top
This website uses cookies. We will assume you are fine with this. You can opt-out if you want to.AcceptRead More