Doing Business in India VS Indonesia 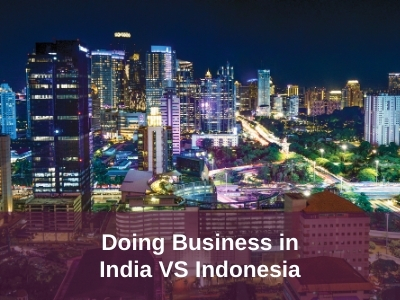 Many countries from around the world shift their productions to the south and south-east Asian countries. The cheap skilled labour force and the low production cost and financial incentives offered by the government are the main reasons for that. These two countries are located in the same region, hence comparing India vs Indonesia at a deeper level is very important.

Developing countries such as India and Indonesia have established Special Economic Zones to attract foreign direct investments. Today, foreign business setups have contributed to the GDP of both countries. Let us see the wide differences between both countries.

The economic development of India vs Indonesia is booming. They both have domestic and foreign investment cycles. They have an unsatiated aspirational consumption demand. India is a better asset than Indonesia with human capital, especially in information technology, managerial jobs, and entrepreneurship.

On the other hand, Indonesia has a slight upper hand over India in low-end manufacturing, ease of doing business, and social and health indicators. Infrastructure development and poverty eradication have been important goals for successive governments in both countries, and both suffer from delays and lopsided implementation.

The macroeconomic environment of both countries are as follows:

India is a country holding different cultures and diversities. This diversity in culture helps Indians to learn to adapt to the community faster. The 5000 thousand years long history is the best example. On the other hand, Indonesia is not much to adapt to a community environment.

In India, businesses are more outraged on a cultural basis rather than work associations. The relations among individuals affect the business environment. The more reliable a company is, the more it attracts customers.

As compared to any other country in its developing or developed phase lacks in the aspect of behaviour with core values while doing business. In contrast to India, Indonesia holds its works on resourcefulness rather than its culture.

India is more developed with a long history as one of the great civilizations. Indonesia adopted that civilization as its culture. In the sector of development, India has a strong workforce in STEM, while Indonesia lacks a large number. The IT sector in India is thriving progressively compared to Indonesia. A lot of Indians work in IT sectors in major developed countries.

Since India has a large population compared to Indonesia, it is much harder to reduce inequality leading to the rise of poverty and affecting the economic growth of the country. With popularity like 4-5 times larger than Indonesia, the Indian government has more complicated problems compared to the Indonesian government.

An important thing to be noted is, India’s population is 1.2 billion, while Indonesia’s is just 250 million. There’s a lot more space for development and improvement in India when compared to Indonesia in the future. Hence, India wins in doing business from the development aspect in India vs Indonesia.

Undoubtedly, India has a comprehensive system of tax contracts. Generally, the business operating in India has to make 33 tax payments per year. The headline corporation has a tax rate of about 30%. Even after this, companies can sustain charges in the form of a property tax, VAT, fuel tax, and more.

On the other hand, Indonesia has a casual rate of taxation at the rate of 25%. Companies with a minimum of 40% of their shares to the public listed under the Indonesia Stock Exchange offer a tax of 20%.

There is a wide range of taxes in Indonesia that companies, investors, and individuals need to deal with a business. These taxations include corporate taxes, individual income tax, withholding taxes, international taxes, and more. 3E Accounting Firm is an ideal solution with a reputation for providing business advisory services and trusted compliances to entrepreneurial business.

Settling a comparison between India vs Indonesia, both countries have their advantages and challenges. On the development front, India has the upper hand due to its large population and its advancements in technology. But Indonesia is picking up fast in recent times. The government has been planning very well and the country can be a specialized hub in areas where they want.

India is ahead of Indonesia as of now. Indonesia is undergoing a phase of political chaos. The coalition government that reduces the effectiveness of governance while India has come out of the coalition chaos.

Other than this, Indonesia does not hold much of a diaspora. Lead to the transfer of knowledge from the west to Indonesia. Most of Indonesia’s industries are resource extraction industries that lead to inequality and the resource curse, unlike India having knowledge-based industries that create mass prosperity. Hence, for all the good reasons, India can be your choicest business destination.

3E Accounting firm helps in company setup by taking care of all the government compliances, bank account opening, getting the license, completing the documentation work. You can completely rely on 3E Accounting as they are a one-stop solution for all business needs.